Why is the Ocean Salty? The Science Behind Salinity

New England Science & Sailing > Marine Science > Why is the Ocean Salty? The Science Behind Salinity

Ever been swimming in the ocean and have a big wave come at you quick? You probably got a big gulp of salt water. Yuck! But why is the ocean so salty?

97% of all water on Earth is salty and the ocean covers about 70% of the entire Earth’s surface! The simple answer is: salt comes from rocks on land. It all boils down to the water cycle! The rain that falls on land is slightly acidic and this acid erodes rocks. The rocks are made up of salts and minerals that then run into streams, rivers, and oceans. Salt accounts for about 3.5% of the oceans’ weight, or as scientists say, the salinity of seawater is 35 part per thousand. 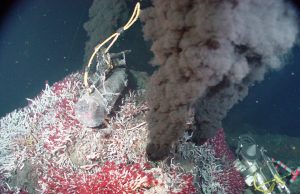 Salt also comes from the bottom of the sea. Hydrothermal vents are found on the crest of oceanic ridges that also release dissolved minerals to the ocean. Hydrothermal vents are where sea water that has sunk into the earth’s crust flows back into the ocean. Along with the water, comes salts from the crust. Underwater volcanoes have a similar effect!

Why aren’t rivers and streams salty? 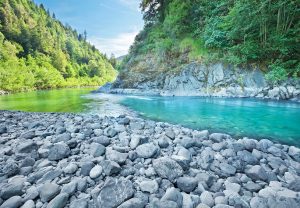 In the beginning of time, the ocean probably wasn’t very salty either. But over millions of years as it rains on the planet, more and more rocks and broken up and causes the ocean’s saltiness. Rain helps add more fresh water to streams and rivers, so they don’t hold much salt. Whereas, salt and minerals from all rivers flow into the ocean. So, the ocean ends up collecting all the salt and minerals! Globally, rivers carry about 4 billion tons of salt to the ocean every year!

How do animals and plants survive salt water?

If we tried to drink salt water, we would dehydrate very quickly! But many ocean animals and plants have learned to evolve in order to pump out the extra salt. Here are some examples of those adaptations! 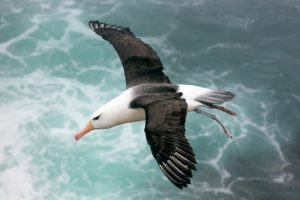 Albatrosses are some of the biggest birds that can fly! These birds fly months at a time only drinking ocean water. To get rid of the extra salt from the sea, the birds have salt glands behind their eyes. These glands release extra salt

through the tip of the beak. Kind of like very salty snot!

Fish have salt water constantly flowing in and out of their gills. They can pump out the extra salt through specialized cells in their gills and through their kidneys. Sharks are a little different. Sharks keep their body balanced with the ocean. Urea is a chemical that helps the sharks keep the same amount of salt inside their body as there is in the ocean. Sharks’ digestive systems will still help get rid of extra salt, though. 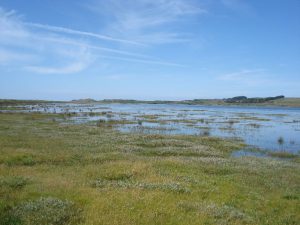 Marine plants also had to evolve to many environmental pressures! One of these pressures is salinity! Different plants deal with salt water in different ways. Some store the salt and then excrete it. Other plants break salt down into sodium and chlorine. Some plants also have a membrane around their roots that protect them from absorbing too much salt.